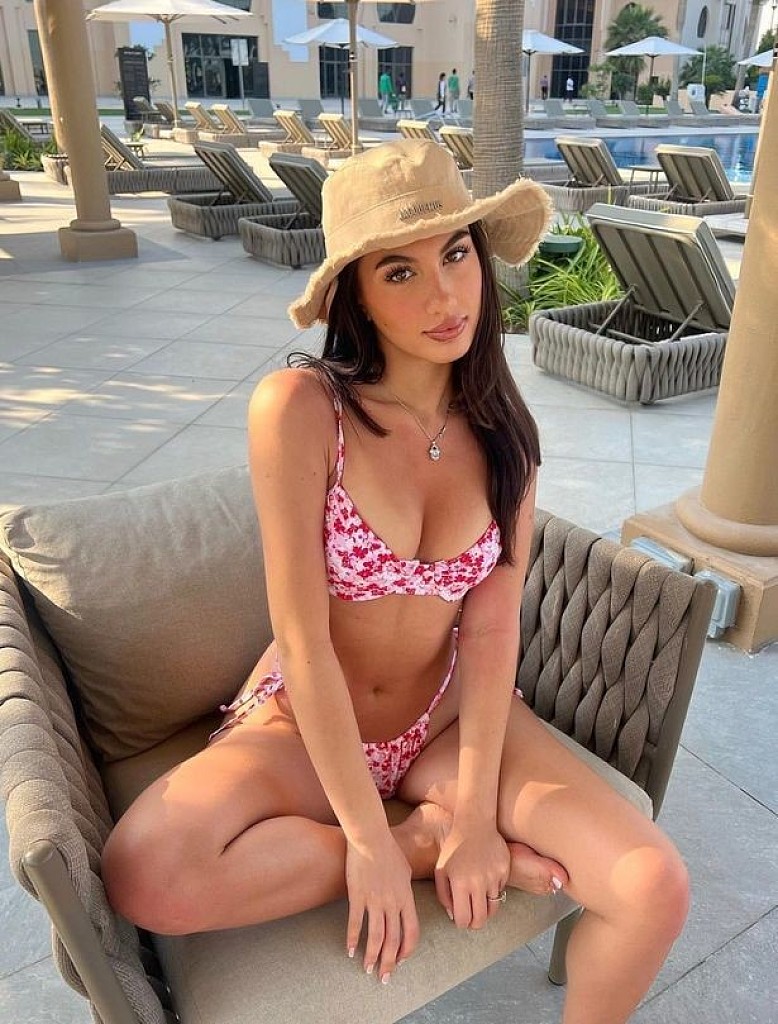 The Apprentice star Karren Brady's daughter Sophia Peschisolido has zoomed in on her curves in a barely there bikini for some sexy snaps and a sultry video.

The stunning 24-year-old brunette bombshell posed up a storm and flaunted her washboard abs and modest curves while wearing a string bikini Qatar.

Currently holidaying in Doha, Qatar's capital for the FIFA World Cup, Sophia looked sensational as she sizzled in a slew of snaps.

Wearing a pink string bikini covered in a sweet floral print, Sophia posed on a chair while outside in the sunshine. 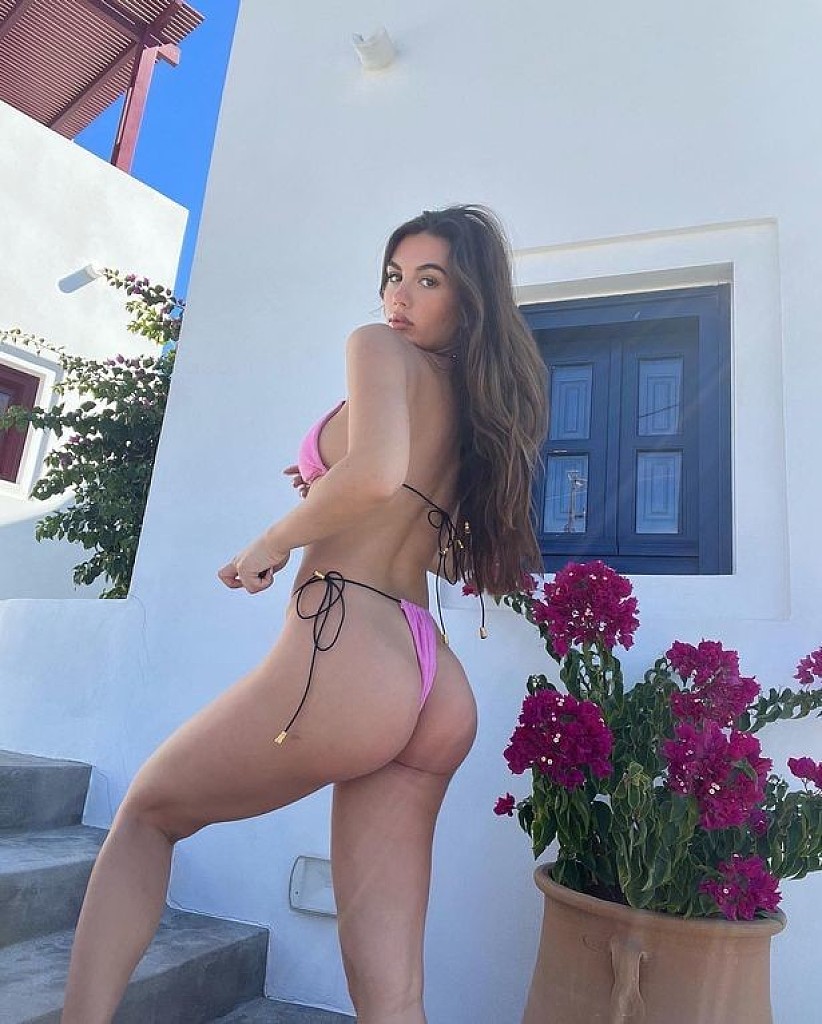 The brunette babe donned a straw hat with her hair cascading over her shoulders as she smiled and posed sweetly for the camera.

With over 360,000 followers, it was a given that fans of Sophia were quick to gush over the sizzling snaps.

One person penned: "She is the moment," while another said: "Yummy honey."

"You bring sunshine to my world! You are so sweet," declared a fourth.

She then took to her Instagram stories to zoom in on her impressive abs and physique.

Panning the camera across her body, Sophia gave fans a closer look as she zoomed in to her taut stomach and toned legs.

Sophia is the daughter of The Apprentice's Baroness Brady and Paul Peschisolido. She has one brother, Paolo, 22.

The influencer became engaged to her partner Frankie Makin earlier this year, with the couple announcing the news in July.

When the engagement was announced, proud mum Karren took to her Instagram account to gush over her daughter's joyous news.

Sharing a snap of Sophia and Frankie kissing, where her daughter could be seen donning a huge diamond ring, Karren penned: "I can't believe my little girl is engaged!!"

In the recent snaps of Sophia in Qatar, her engagement ring could clearly be seen on her left hand. 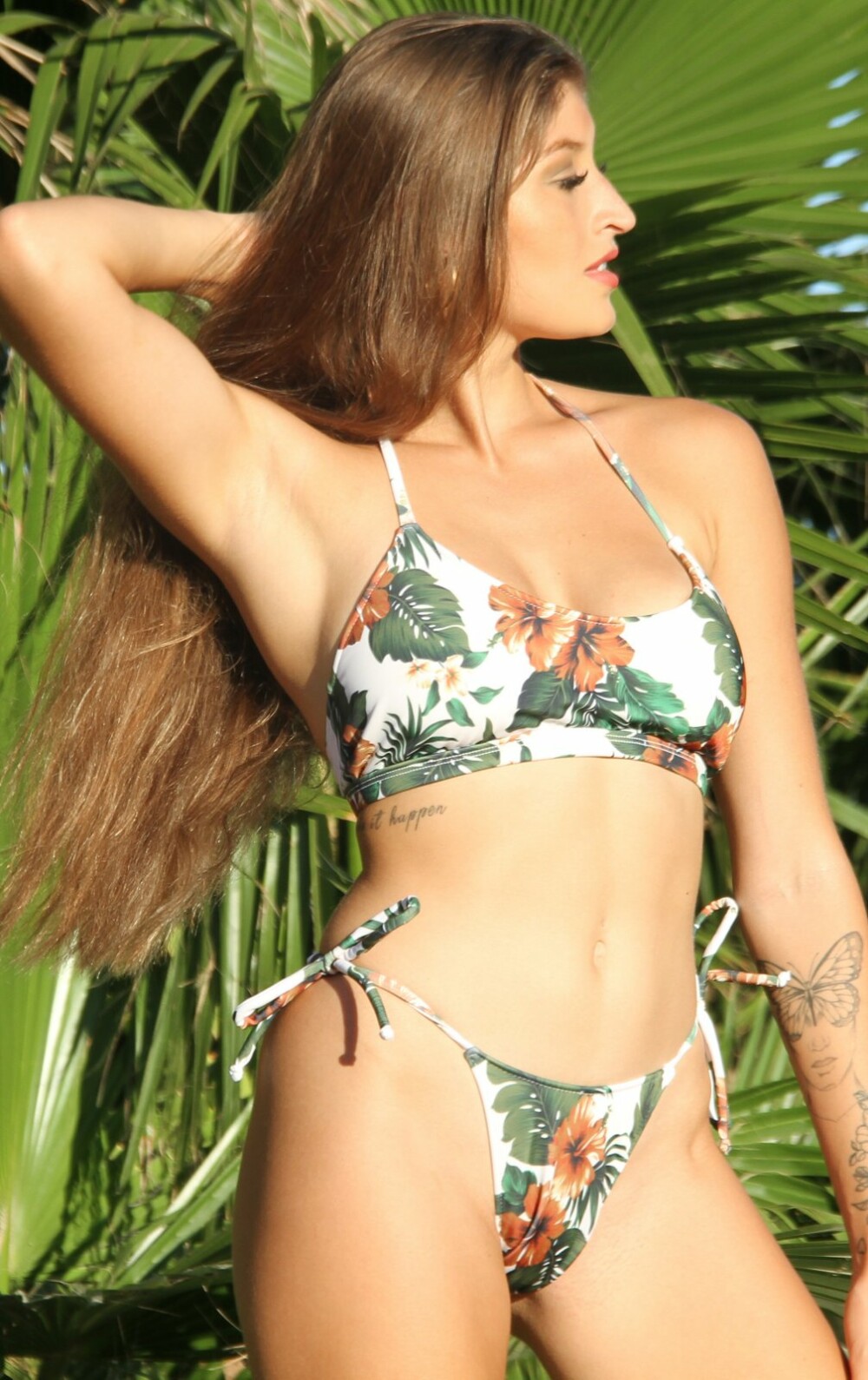 Mai Tai Bikini The Mai Tai Bikini in South Pacific Matte is out of this world- the best! It ties everywhere for the perfect fit for all body types. The top scoops the cleavage with spaghetti ties at neck and ribbon ties will offer support with a band under bust tying at back. Ultimate comfort in a string bikini top! The...

The Apprentice star Karren Brady's daughter Sophia Peschisolido has been hailed as the "hottest woman on the planet" after posing up a storm in a teeny bikini.

Looking sensational in a white string bikini, the 24-year-old brunette bombshell posed up a storm and flaunted her enviable figure.

The snap was originally posed in May 2021, but Sophia treated fans to the sizzling display once more on Thursday (November 3) when she shared it on her Instagram stories, along with some other throwback snaps from her travels. 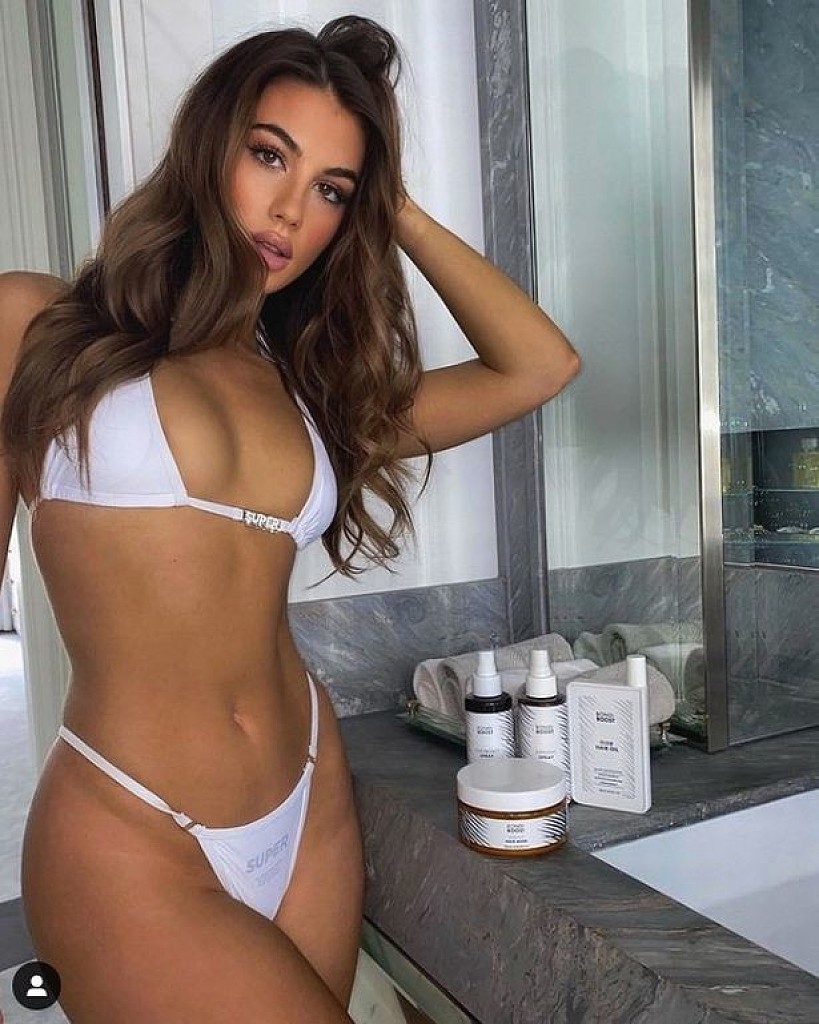 Posing on some steps while on holiday abroad, Sophia sizzled as she smiled for the camera.

Wearing a tiny string bikini with a shirt over the top but worn undone, the stunning influencer couldn't help but show off her washboard abs and toned legs.

Fans were quick to comment on the red hot set of snaps, with many leaving flustered emojis, flames or heart eye faces.

One fan even branded her as: "The hottest women on the planet."

"As close to perfect as possible. Amazing smile," penned a second.

"You are absolutely gorgeous," said a fourth.

While a fifth cheekily penned: "Better than most," before adding: "joking. Perf."

And a sixth said: "Too much beauty."

Sophia is the stunning daughter of The Apprentice's Baroness Brady and Paul Peschisolido. She has one brother, Paolo, 22.

The influencer, who has over 360,000 followers, became engaged to her partner Frankie Makin this summer.

In July when the engagement was announced, proud mum Karren took to her Instagram account to gush over her daughter's joyous news. 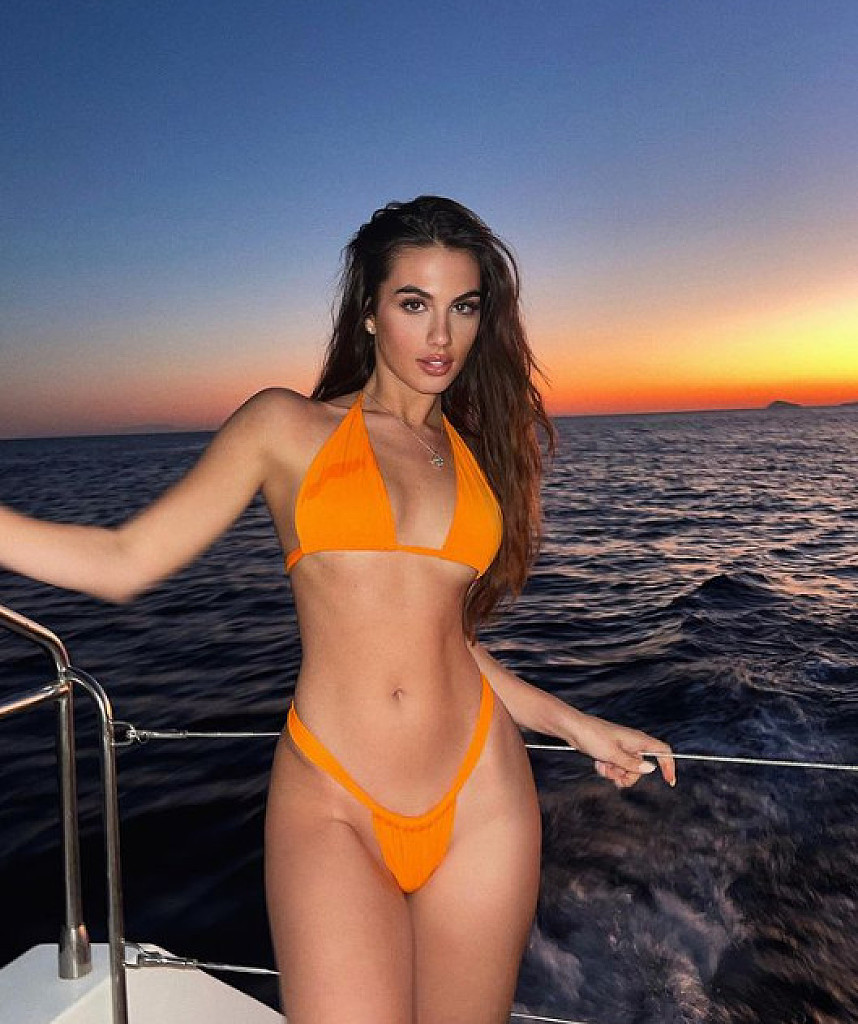 Posing up a storm in a skimpy orange bikini, the beautiful brunette showed off her washboard abs and enviable figure while standing on a lavish yacht. 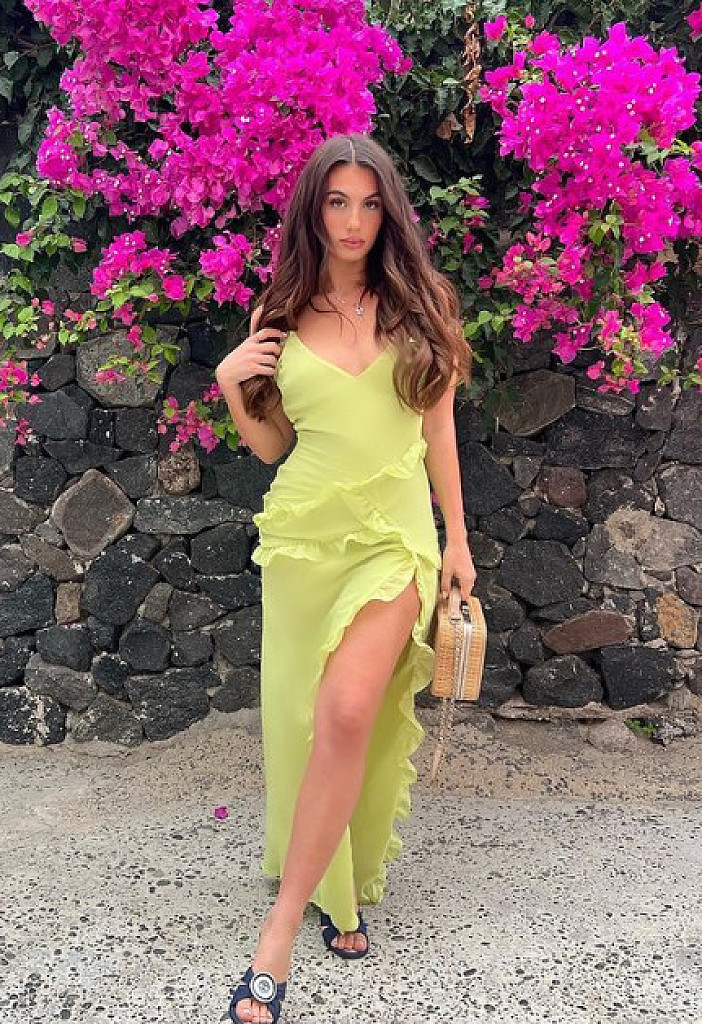 The 24-year-old model often leaves everyone stunned with sizzling snaps, and her most recent jaw-dropping display is no different.

Wearing a tiny orange bikini, Sophia looked sensational as she smiled at the camera while standing on a boat with a picturesque sunset behind her.

Her taut and toned stomach was on full display, which no doubt left her fans feeling hot under the collar.

In the caption, Sophia penned: "The sunset was pretty,"

Siesta Bikini Lounge away the day in the Siesta Bikini in Aqua Marine Matte, it stretches with your every curve! The long triangle halter covers your bust on an adjustable ribbon slide and holds you where you want it. The self sliding neck will adjust to you perfectly. The front of the bottoms slides on a ribbon and has a high open leg, rio...